A busy quarry owned by RJ Mittens in County Fermanagh, Northern Ireland has recently taken delivery of a new Tesab 800i Jaw Crusher and has already put it to good use at the quarry face. 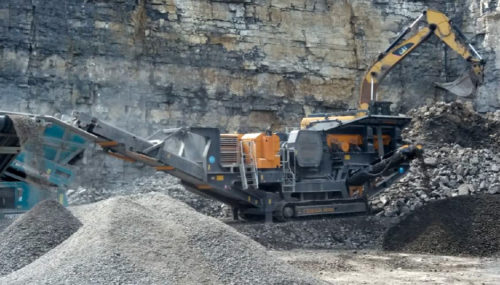 With a range of Tesab equipment already being used in the quarries, the decision to upgrade to a new Tesab 800i was very easy for the quarry owners. The Mitten family run two quarry sites in Fermanagh in the business that was started off by the late Robert Joe Mitten in 1969. Third generation Roy Mitten – along with his father Eric – now run the 2 Quarries, which combined, produces up to 700,000 tonnes of material per year!

“My grandfather started back in 1969 with a sand and gravel pit in Derrylin,” said Roy. “In the early 1980s we purchased Rockfield Quarry at Lisnaskea and ten years later we also purchased the Magheradunbar Quarry.

We produce up to 700,000 tonnes of material a year from both sites, with 250,000 tonnes coming out of the Magheradunbar Quarry, supplying all sizes of aggregates as well as agricultural lime locally in Enniskillen. Our biggest customers are those involved in the precast and readymix industries,” he said.

The new Tesab 800i Jaw Crusher is the latest offering from the Omagh-based manufacturer and replaces the already established Tesab 10580 model. Designed specifically for crushing primary rock at the quarry face the 800i features Tesab’s new and improved step deck vibrating feeders which helps the machine handle dry or wet material. Plus it has an independent two deck pre-screener for extra production.

“We have been using Tesab equipment here for 25 years and for us the brand has performed brilliantly over the years. Before the new Tesab was in operation here, we used the older model, the Tesab 10580, for eight years. Indeed, that machine gave us great service over the years but it did not have a pre-screen facility on it.”

Roy adds, “This new 800i model is getting us over 400 tonnes per hour and comes with a secondary belt outlet which dispenses the finer grade material for immediate resale. We use it to break down the material from the quarry face to 150mm which is then screened, making the resulting material easier to handle. This machine will run all day, every day, and will put around 2,000 hours on the clock each year.”

“On top of the additional outlet belt to the side of the Tesab 800i it also has a magic eye which keeps a control of all the material flowing into the jaws,” Roy says. “If the operator puts too much in there, the machine automatically identifies this and stops the feed until the jaw is free from obstruction. This prevents blockages and maintains a more consistent flow of material going through the machine and onto the screener.”

Across the two sites operated by the Mitten family they use three Tesab Jaw Crushers; two of the older 10580 models and the new 800i. They also have two Tesab Impact Crushers – the 1412T and 623CT. The two Tesab 10580 jaw crushers with extra deep jaws date back to 2005 and 2007 and are used across both the quarry sites. The 1412T is used as the main secondary crusher at the Enniskillen site and was purchased new in 2008. Most impressively however, they have one Tesab 623S static model that was bought new in 1993 and has been fully reconditioned by Roy and his team. 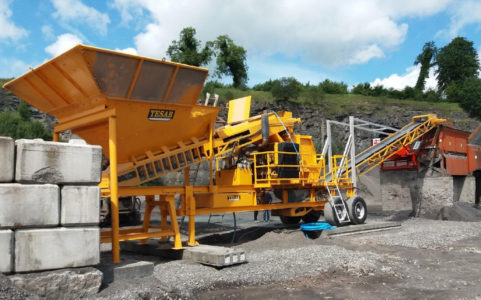 “The Tesab 623S has around 30,000 hours on it,” said Roy. “We bought it in the early 90s and decided recently to refurbish the machine as it is still a vital piece of equipment here. It breaks material down from 70mm to 20mm and is powered by a Cat 3306 engine, which, from experience, we knew was a very reliable engine.

“The hopper was modified so we can fill it with the bigger loading shovels, the conveyor was extended and the engine was reconditioned. All this work should give it an even longer life with us. It really has given great service to our quarry,” he said. “The Tesab 1412 is powered by another Cat engine – the Cat C13 – which again is very reliable and has given very little bother over the years,” he added. 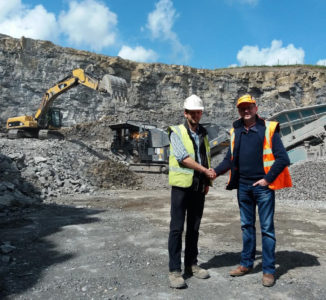 The new Tesab 800i was sold to the Mittens by Tesab Sales Executive Leon Connolly. He explained:

“The 800i is the flagship model of the Tesab Crushers, designed for quarry operators looking for maximum output with minimal downtime. The 800i is a high output, simple and highly reliable, primary jaw crusher, with no fancy electrics and no Canbus or PLC computer systems on board.

With the 800i we have listened to the market and retained the benefits of proven 10580, 24 ton jaw unit, along with a more streamlined feed system with a two deck independent pre-screen. This new model is improving production by over 25 per cent from the older model as well as providing a better quality material at less cost per ton,” he added